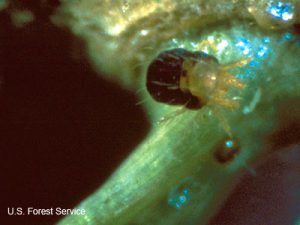 The spruce spider mite is considered one of the most destructive spider mites in the United States. It injures the foliage of spruce, arborvitae, juniper, hemlock, pine, Douglas-fir, and occasionally other conifers. 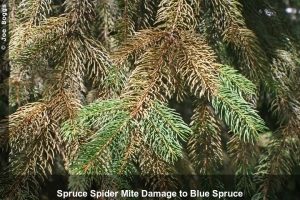 d in the lower and inner parts of the plant. Damage may spread as the season progresses. This species also produces silken webs on the needles.

When plant foliage begins to show off-green, or stippled, color and spider mites are suspected, perform a foliage check. Take a piece of white paper, hold it under a branch suspected of having mites, and strike the branch hard against the paper. This should dislodge the mites, and even though they are only 0.5 mm long, you should be able to see the dark, oval spider mites against the white background. Examine three to four places around the plant. If you dislodge ten or more mites at each site, it would be advisable to apply a registered miticide.  Ostvig Tree Care has licensed professionals that will be able to apply it both effectively & properly to your trees. 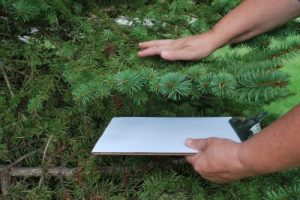 This species is sometimes referred to as a cool season pest. The best time to treat spruce spider mite infestations is in early to mid-May, and again in early September if needed. Repeated applications are sometimes needed to keep mite populations in check.  Also, mite populations may increase following the use of certain insecticides. Ostvig Tree Care has licensed professionals that will be able to apply it both effectively & properly to your trees.  Call today at 952-473-0534 or 651-653-9930.