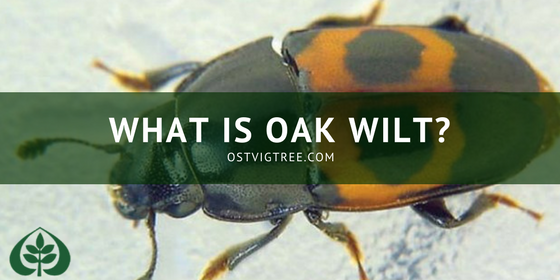 What is Oak Wilt?

Oak wilt is a vascular disease of oak caused by a nonnative fungus. It is one of the most serious diseases of oak in the eastern United States, killing thousands of trees each year. Where site conditions favor disease, the fungus can spread from tree to tree, killing most if not all oaks in the stand. As the disease spreads across the landscape, the loss of oaks can impact native plant and animal communities, property values, and forest industries.

The disease is well established in the southern half of Minnesota and is spreading into northern Minnesota. The disease is of greatest concern in stands dominated by oak growing on sands in areas exposed to frequent wounding. In these areas, infected wounds start new infection pockets. In sandy soil, abundant root grafts promote rapid below-ground spread so infection pockets expand rapidly and coalesce. Where root grafting is limited (e.g., on heavier soils, on steep slopes, or in diverse stands), oak wilt tends to be less damaging. In Minnesota, disease occurrence is highest in the 10-county metropolitan area and parts of Rochester.

How Does It Spread?

Most trees can become infected by the fungus below ground. The fungus moves from an infected oak to a healthy oak via root grafts underground. The disease can spread between root systems of trees growing as far as 50 feet apart. Nearby pairs of trees may graft together in dozens of places. Most grafts occur within the same root system or between trees of the same species. But root grafts may occasionally occur between different species of oaks. 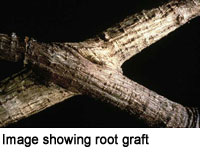 Beetles can spread oak wilt above ground. This is only way the disease is known to cross highways, rivers, and other physical barriers. Above-ground spread occurs infrequently, but is the means by which new oak wilt infection centers can get started. The oak wilt fungus is most commonly spread above ground April 1 through July 15. The fungus creates s 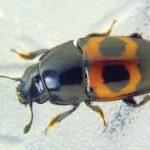 porulating mats between the bark and the wood when it invades oaks.   Sap beetles, primarily of the family Nitidulidae, are attracted to the sweet-smelling mats. The beetles feed on the mats and carry oak wilt spores to wounds on uninfected trees, continuing the spread of the disease.

Unseasoned oak firewood can spread oak wilt. To prevent spreading oak wilt, avoid moving infected firewood off-site until it has been well aged. Fresh firewood must be covered and sealed to the ground with 4-mil plastic sheeting during the growing season of the year following the year in which the tree dies in order to prevent beetles from reaching the wood and picking up fungal spores. Otherwise, all infected wood should be chipped, burned, debarked, or buried prior to April 1 of the year following the year the tree dies. Because they dry quickly, wood chips from infected trees may be used in the landscape. 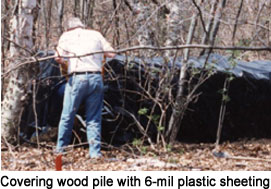