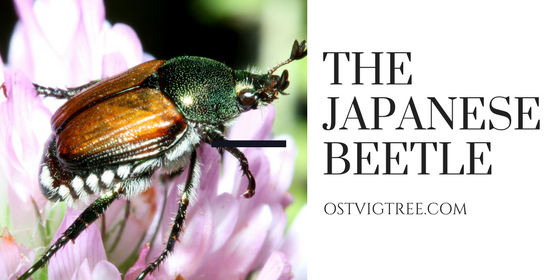 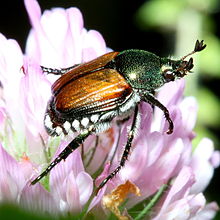 In Minnesota, Japanese beetles (Popillia japonica) are primarily found in the Minneapolis-St. Paul Metropolitan area, and in some areas in southeast Minnesota. Japanese beetles have an exceptionally large host range, feeding on the leaves of over 300 species of plants, including apples, grapes, blueberries, raspberries, roses and plums.

Japanese beetles are 3/8 long and oval. Their head and prothorax (the area behind the head) are metallic green, while the wing covers are a shiny bronze. Look for five white patches of hair along each side of their body and two white patches on the tip of their abdomen to verify that they are Japanese beetles.

Adult Japanese beetles feed on the leaves of many different plants including birches, basswood, apples and raspberries. They feed on the leaves between the veins, so when they are finished, they leave a skeleton of brown fibers where the leaves used to be, a type of damage referred to as skeletonizing. Damage to raspberries can occur where the beetles eat flowers along with the fruit or if the beetles kill so many leaves that the plant is weakened and cannot support fruit. 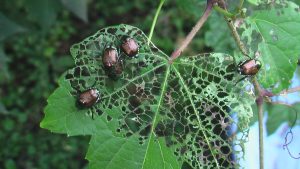 Japanese beetles spend the winter as grubs in the soil of turf grass areas. In spring, they move near the soil surface, where they finish feeding and pupate. They emerge as adults in late June or early July and can fly a long distance to suitable feeding sites. When an adult starts feeding on a shrub, it emits a pheromone that attracts other beetles, so that beetles will aggregate on that shrub. This behavior results in large numbers of beetles feeding on one plant while neighboring plants are left alone. The female releases pheromones to attract males. After mating, adult females lay up to 60 eggs in turf grass. The eggs hatch in about one to two weeks, and the grubs feed on the roots of grasses and other plants. As the soil starts to cool in the fall, the grubs dig deeper in the soil, where they overwinter. Adults primarily feed in July and August, although you can find some activity into the fall. Japanese beetles have one generation per year.  Contact Ostvig Tree Care for treatment options at 952 473 0534 or 651 653 9930.  We will be happy to help.