The Asian Invasion (or Japanese beetles are damaging trees) 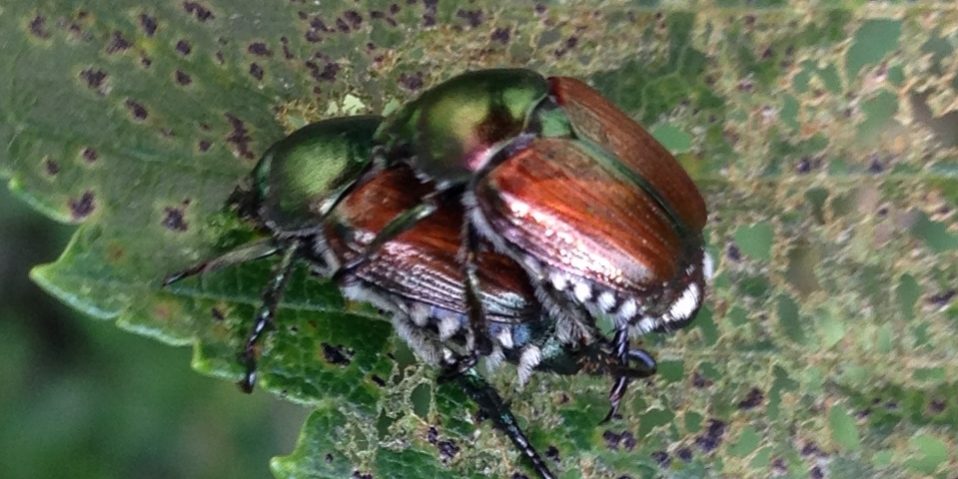 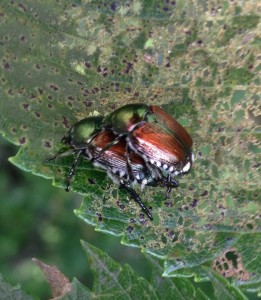 Japanese beetles are again wreaking havoc on trees, shrubs, vines and flowers throughout the Twin Cities.  While adult beetles can be found congregating and feeding on many flowers, including roses (Figure 1), they also feed on the foliage of many species of trees including some conifers. 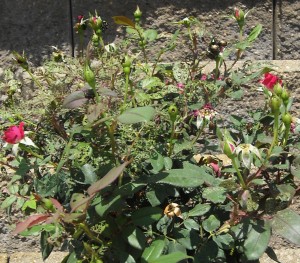 Preferred species such as apples, crabapples and lindens can be entirely defoliated.  This year we’ve also noticed heavy damage on elm trees.  Beetle feeding creates holes between the leaf veins giving the remaining leaf a net like appearance (Figure 2).  If the majority of the leaf is consumed all that remains is a brown dehydrated network of leaf veins (Figure 3, 4). 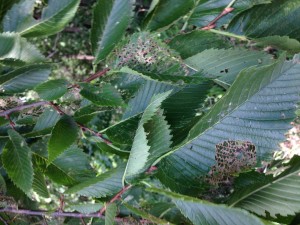 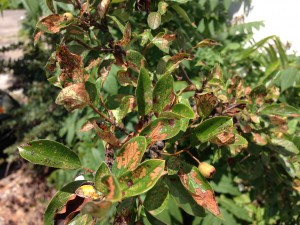 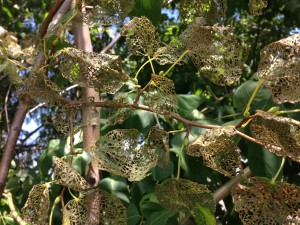 For smaller plants, such as flowers, fine netting can be used to protect the blooms and foliage from defoliation.  For larger flowering plants and trees and shrubs it may require the use of insecticides.  Weekly applications of topical insecticidal sprays may be necessary to protect trees from damage.  The application of soil applied systemic insecticides can also be effective. 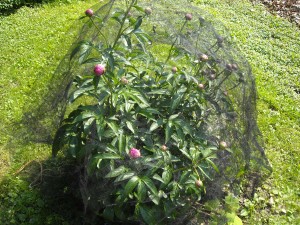 Many spray products and systemic products are available for homeowner use, but it is recommended that you only treat trees such as lindens and crabapples after they have flowered to not impact bees that may be feeding on the flowers.  It is also recommended that you use short lasting systemic insecticides on flowering trees to reduce the time they will be in the tree so that it doesn’t carryover to impact bees the following season.

Treating lawns in the spring, summer and fall to kill Japanese beetle larvae in the soil, is not an effective way to control adult beetles.  The beetles can fly for miles to find a good tasting tree to feed on. 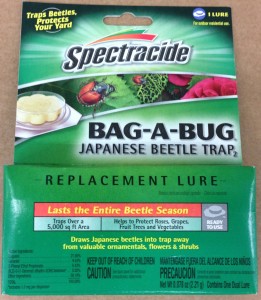 Because they can fly for miles we also don’t recommend using Japanese Beetle traps in your landscape.  Why you may ask?  Because they work.  You will bring more Japanese beetles into your landscape with the traps.  Only a few will get into the trap.  The others will likely find something even better to feed on in your flower beds or on your trees and shrubs.  As tree care providers there is nothing more depressing than seeing a defoliated tree with a Japanese beetle trap placed next to it. 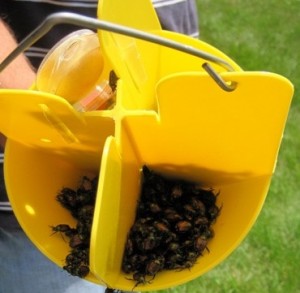 If you have significant injury on your trees due to Japanese beetle, but don’t see the beetles actively feeding you shouldn’t plan on treating.  They are most likely done for the year.  It would be wise to plan preventative measures for next season to reduce the potential for continuing defoliation.

When using any insecticide product for control of Japanese beetles, read and follow the label.  It is the law.  If you don’t feel comfortable applying products yourselves, experts such as the plant health care staff at Ostvig Tree Care will be happy to assist you.  They know the best products to use and know how to time treatments to get optimal control of the beetles while reducing the treatment impact on other beneficial insects.

Dr. John E. Lloyd, Ph.D. is President of Plant Health Doctors, LLC in the Twin Cities.  He can be contacted through Ostvig Tree Care at info@OstvigTree.com.